1. My friend delivered a purple mum to my front porch on Saturday, and today, I really enjoyed that mum.

2. Today I connected two people who needed to know one another because I could tell they were kindred spirits. I made the introduction and went about my day. Later, I saw them walking together on campus, completely absorbed in a joyful conversation. I hid myself from view and watched them for a minute. I smiled about them all afternoon.
3. My wise friend told me to juice some oranges and boost my vitamin C since I’m feeling so lethargic. I juiced lemons and oranges, added gingerale, and sipped on the fizzing bliss all afternoon. I now feel like a new woman.
Mums, matchmaking, and mandarin orange fizzy drinks–it’s a fun little Wednesday.

I forget my umbrella. It’s cold, dreary, and miserable. I run to my car, and still, I’m soaked.

My daughter forgets her umbrella! It’s cold, wet, and magical! She insists on walking home with her friend, in the rain, “for the fun and for the puddles.” She’s soaked through and so happy.
Oh, perspective! Oh, point of view! 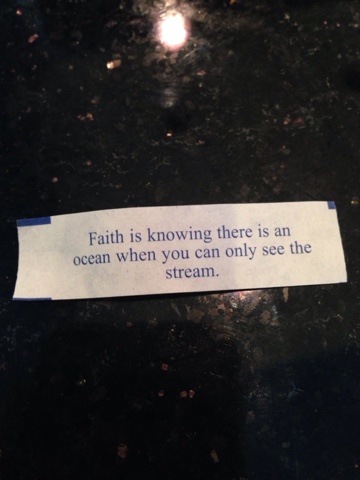 I live in a dog neighborhood. I love the dogs! I love Peanut, Skittles, and Belle on my street, and I love the regulars I see on the walk to school every morning. On any given day, I’ll pass a dozen dogs with their owners.

But we don’t have a dog. We have cats.

One day a few weeks ago, I decided to join the dog club by putting our enormous dalmatian dog stuffed animal (a present for my youngest when she was two) in the window.

From the outside, it looks like we indeed have a dog. He gazes down upon the neighbors, and folks point up and wonder about him all day long. The little children absolutely love him, and they don’t realize he’s not real.

My across-the-street neighbor (after she survived the shock of him staring down at her) advises me to dress him for Halloween. I must! I might change his costumes with the seasons; I can see the Pilgrim hat, the Santa hat, the New Years party hat. . .

I tell her that we have a collection of large stuffed animals given to us by grandparents including a gorilla, a tiger, an elephant, and an alligator. These life size creatures are just waiting their turn on the window bench to freak the neighbors out as they walk by.

“Oh, yes! Do that!” my neighbor says as we laugh about it together.

I think I will.

My sister tells me of an unusual circumstance on her street this morning. Because of a broken water pipe, the county turns off the water to a neighbor’s home. What can he do while he waits for the repair?

Apparently, he can plug into another home’s supply. He can run a hose from my sister’s house back to his house. When she hears of this possible solution, she says without hesitation, “Yes! You can plug into my supply!”

The offer has me smiling all morning. I think about my own spiritual and physical supply that I invite neighbors to plug into with each new day. I want to be that filled, that overflowing with God’s love and provision, that available with resources that I stand there ready for the hose.

And I think about what I lack and how, in my own time of need, I tap into so many neighbors’ supplies of time, meals, encouragement, and even transportation. I’ve plugged in through sickness, disappointment, fear, loneliness, and car trouble.

When we’re in need, we plug in. When we’re in great supply, we open the gate, affix the hose, and let what we have bless the house who needs it most.

My wonderful mother-in-law, a fine southern woman, has educated me well in the art of southern living. In the past 15 years of marriage into a southern family, I’ve learned all about fried chicken, fried okra, sweet tea, and pimento cheese sandwiches. I’ve learned about slow time around the table.

I know southern food, and I thought I knew most southern expressions and even used them myself. I could reckon so, carry on, go somewhere directly, be fixin’ to do something, and straighten up something that was cattywampus. I could be “as serious as a heart attack” and make sure I “didn’t get too big for my britches.”

Other phrases I needed help understanding, so folks in town (thank you Mrs. Weaver!) tutored me back in the early days of marriage. I learned that “the devil’s beatin’ his wife” meant it’s sunny but also raining. I learned that when I was nearly finished with the dishes, I was “on the short rows” based on the short rows at the end of the tobacco fields where the tractors would turn around.

We’ll today, I was complaining about how some of the fruit farms don’t yet have apple cider. I said, “I’m so disappointed!” I said it as if this were the worst thing in the whole world.

My mother-in-law turns to me and simply says, “Well now, build a bridge and get over it.”

Build a bridge and get over it! Stop your complaining! This isn’t anything to fuss about!

I thought about the expression all day. When I want to complain about anything, I know I’ll shut my mouth. I’ll build a bridge and get over it real quick now.

I love foggy mornings that make the sunbeams visible. On the walk to school, we stop and observe the sunlight filtering through the forest. It’s so beautiful that we pause and look, take pictures, and sigh.

I will forever love dappled, foggy morning light streaming through trees. I pray I walk a million more miles with these neighbors, on this path, by these woods, in this light.

We agree that long after our children are grown, when we’re so old we creak and stumble, we’ll walk to school and chase the light.

I’ve mostly solved my travel anxiety issues! I realize how much I love asking people about their lives wherever I am. When any setting becomes a rich wonderland of stories, I take my focus off myself and my mind’s worries.

I participate in something extraordinary: you.
I’ve met a researcher caring for Native American communities and offering insight into high risk behaviors. I’ve listened to tales of bitterness and forgiveness. I’ve learned of supernatural revelation and prayers.
Wherever God takes me, I eagerly await your story. And now, you’re part of my story. We’re in this life together.
So I can travel better now. I’m on the lookout for stories. Who has time for worry?

My little overnight bag is packed because I’m flying to Chicago to speak at Moody Chapel tomorrow. I have two radio interviews while I’m there (WMBI and Chris Fabry Live). I fly home right after. It’s so exciting! I’m actually giddy about the people I’ll spend time with and even the food I might eat (Just being honest about the food.) I’ll get to talk about Jesus and encourage people!

The best part is I just write and arrive places, and my publisher and publicity manager set everything up. They arrange flights and meetings and email you organized itineraries of your time. I knew that part of publishing a book involved promotion, but I didn’t realize how it would happen. I was so nervous that book promotion meant me constantly talking about myself, posting pictures of myself on Facebook, tweeting about what airport I happened to sit in, and Instagramming myself every hour. I couldn’t do it! It would hurt my soul!

I even told my new website designer from Moody that if my website was a big picture of my face and all about me that I would absolutely cringe. I know that an author website is part of it all, but still.

I didn’t want to be a marketing expert; I wanted to be a writer.

Know this: A great publisher lets you be a writer, not a publicist or marketing expert. A great publisher offers you a team of people who care about you and the book you’ve written so you don’t have to worry all day long about marketing. You can be yourself and celebrate without becoming consumed with fame, sales, or attention.

It’s a fun week. I think back to that first time on local NPR over 5 years ago when I wore my pearls even though nobody would ever see them through the radio. Do you remember? And now, it’s the radio again, and I’m going to do it all with flair.

A magnificent transformation occurs in my kitchen. How? I decide it’s time to clean the window screens. They just seem dusty and more like a platform for spider webs than anything else. I don’t really notice on most days, but since I’m in a change-of-season cleaning frenzy, I pop the screens out to wash them.

But then I realize that I never open these particular windows, especially now in the colder weather. I question why I have screens at all. I therefore put them aside into storage and go about washing my kitchen window, inside and out.

You would think I lived in a brand new sort of house.

The clear view to the forest! The immensely bright late morning sun! It’s like that allergy commercial when someone pulls the hazy film off and you see things as they really are, as they are supposed to be.

That screen blocked more than I could ever imagine. That screen–that I really couldn’t discern–hindered my whole experience of the landscape around me. It filtered everything into a dim version of a backyard.

Oh, to remove whatever’s dimming my own heart’s experience! Oh, to tear off the filter and wipe away the grime to reveal what’s always there but shadowed! I take a deep breath and ask God to do this kind of cleansing in me. I cannot look out my window without thinking of all I missed with that screen blocking my view.

In my writing classes, we talk about writing with flair, but since March 2010, I've been captivated by what it would mean to live with flair. Could I find a way to make every day joyful and meaningful? Just as a sentence turns into something beautiful with the right verb and punctuation, can I learn to revise my day and punctuate it with flair? Could I record something memorable--some evidence of God at work--every single day?

Search the blog for classic posts and themes!